Opening of the border


Opening of the border

After the Second World War the world, and especially Europe, had to face the new challenge posed by the creation and existence  of the cold war situation for decades. The ideological (and ideology-governed economical) opposition of the two great power blocs and the fierce arms race by the end of the twentieth century led Central and Eastern Europe to full economic and social bankruptcy. Moscow and socialist countries under the Russian leadership tried to maintain the difficulties, but within the majority of these governments the voices of reform started to appear, rushing the inevitable changes. However, paroles like glasnost and perestroika embedded in the public domain through Gorbachev, were not sufficient to provide solutions to problems. The realisation that the economic and social system based on the communist world view and maintained by dictatorial measures is not sustainable, though a necessity, but was not at all evident: the loyalty to Moscow determined in the Warsaw Pact and in the leadership of party states still hindered the innovative processes.

The dividing line between East and West, called Iron Curtain after Winston Churchill, determined the geopolitical dynamics of the eighties. The Iron Curtain ­– which became a real obstacle from a metaphor due to a technical border lock along the Hungarian border – split Europe into two, both in a physical and in a ideological sense. From a social and ethnic point of view, problems were human rights violations perpetrated in Romania during Ceausescu's reign of terror, as well as growing dissatisfaction in East Germany.

Hungary could do little regarding the situation that had developed in Romania, Gyula Horn tried to do everything from a diplomatic point of view to ensure that the abuse of power and serious violations of human rights calls on the international community's attention. There was an effective solution of the German-question, however, offered by the Németh government and its Minister of Foreign Affairs, Gyula Horn. Due to a rapid realisation of the situation early negotiations were initiated regarding the refugee crisis and the Hungarian-German and Austro-Hungarian relations. This brave policy finally brought a huge change in the policy of Europe. In solving the issue which by then escalated to the status of inevitable, the Hungarian government pursued lengthy negotiations with the countries concerned.

The artificial separation of East Germany and West German and the threatening presence of the Berlin Wall led to increasingly serious social tensions. The wall broke apart families, separated friends from each other, and a violation of the border sometimes had consequences that took lives. We know of many cases when German citizens wanting to defect died in the process. Those who violated the closing of the border were many times killed by police officers, but we are also aware of numerous cases of suicide in relation to the wall. The tragedy of people separated from their families and friends by force is the best example of the impact this situation full of political tensions and threats had on the continent and the society. For the citizens of the two Germanys, Kadarist Hungary, by then tamed to be a soft dictatorship, represented a place and opportunity to meet with each other. It became a practice already in the 1970s for East and West German tourists met once a year at the Lake Balaton. Observing the family reunions on holiday, it became quite obvious how greatly the East Germany's economy had fallen behind the West Germany's in just a few decades' time.

At the end of the eighties it started to become clear for the East Germans who did not want to get back to their country that they can reach the "West" through Hungary. The Hungarian internal political pressure grew due to the growing number of East German citizens wishing to defect.

The disintegration of the bipolar world order has brought great changes in the whole world, but because of the division of the whole continent, it had undoubtedly the greatest impact on Europe. Although the appearance of political leaders bringing relief facilitated the reform processes in some Central and Eastern European countries, the task was not easy. In neighboring countries of the Soviet bloc the transition process was less smooth than in Hungary. The fact that this process in Hungary took place in the most peaceful way possible, had a huge effect on the stabilization of the situation in Europe.

Hungary had began the path of reform relatively early, and the new political wave of talented representatives, such as Miklós Németh and his government, together with Gyula Horn were able to take control was hugely beneficial for all actors in politics. Gyula Horn's work as Minister for Foreign Affairs (and preceding that his diplomatic and work as foreign affairs secretary of state) created a climate of trust in Europe (and the US) toward the Hungarian government, and in that environment the Hungarian government was capable to embrace the role of a bridge aiming at creating a Western-style capitalism and democratic system from socialism. 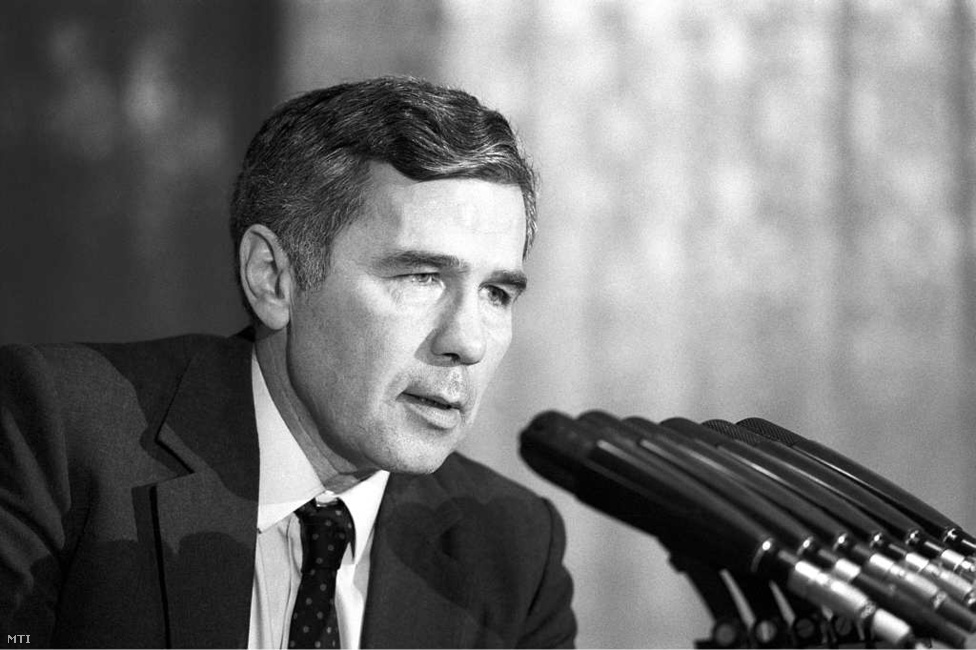 The Hungarian government was forced to conduct hard talks with the leadership of the West Germany regarding the East German citizens residing here. Prime Minister Miklós Németh supported Foreign Affairs Minister Gyula Horn who emphasized on numerous occasions that the German matter can be solved only by taking into account humanitarian considerations, without violent means.

The reformist Hungarian government therefore found itself in opposition with the German Democratic Republicled by Erich Honecker and kept themselves to the trend which started in relation to the issue of world passport, and to the issue of joining the Geneva Convention on Refugees.

Although the East German government asked the Hungarian leadership for rendition of asylum seekers, after the decision by Miklós Németh and his government – risking Soviet repression – Gyula Horn announced on 10 September 1989 that East German citizens currently in our country are able to leave Hungary and enter a third State if they have a document guaranteeing admission to a particular country. As a result, more than 7,000 East German political refugee could leave our country and head West without fear of punishment. It is worth noting that Hungary has taken steps to open before making a decision: in the spirit of establishing good relations with Austria, Gyula Horn and Austrian Foreign Affairs Minister Mock Alais symbolically cut through a piece of the fence on 27 June 1989. The photos taken then traveled the world press, and have become the symbol of breaking down the Iron Curtain. 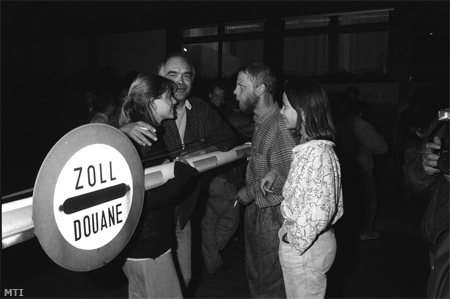 This event in Europe is of great importance in terms of changes in the eighties. Not only because it was the first time that a communist government made it clear that compliance with international conventions on human rights is more important than the Warsaw Pact with other Member States. It is important also because it was the decision which several prominent politicians and professionals later remembered as a starting point of reunification of the two Germanys. 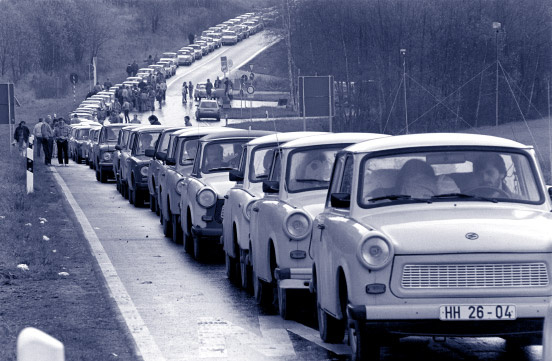 After the decision processes which ensured that Europe's key state is unified and free again after decades of division, and also processes which are there to assist other Member States to achieve this freedom in Europe. Prime Minister of Hungary, Miklós Németh, Foreign Affairs Minister Gyula Horn, who excelled in building diplomatic relations of the country, and their colleagues all gained everlasting merits for a peaceful political transition in Europe and for implementing and gaining freedom.

After this, Gyula Horn became a symbol of bringing down the Iron Curtain in the international political arena; many awards, mostly from Germany, recognise this.

This statesman, who was open to western, democratic values, and who was able to represent the interests of the people, became a symbol of a united Europe, and stuck to these values. Although in recent years Hungary is characterized by strained relations with the European Union, events of the end of the eighties and Gyula Horn's governance were the cardinal points which created our country's reputation in international circles and opened the way to convergence and integration. Gyula Horn's diplomatic and foreign policy activity established him as Hungary's most respected politician in the international political arena. 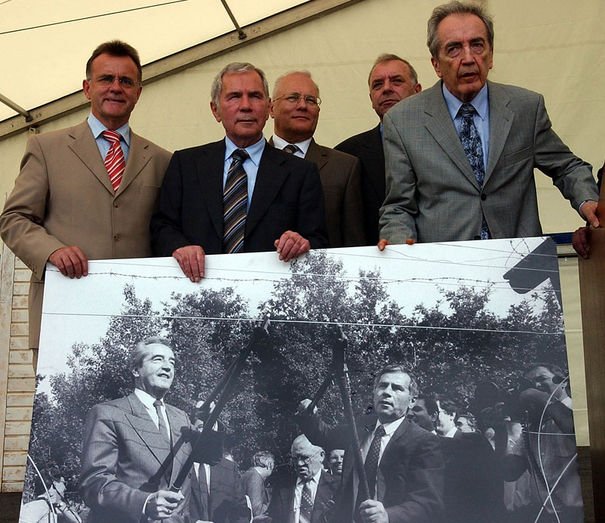 Horn Gyula  »   Opening of the border